I’ve been wanting to write a post on the interesting fashion choices that I see in Paris for quite some time now but was waiting for just the right moment. After visiting a free exposition on Paris Haute Couture this morning at the Hôtel de Ville, I figured now was as good of time as any. Sorry I don’t have more than one picture, not allowed to take photos!

The Englishman Charles Frederick Worth is widely considered to be the father of haute couture (or high fashion in French). In the mid 19th century, Worth revolutionized the process of dressmaking, making it more of an art than a necessity, becoming a true fashion designer. Although he created one of a kind designs to satisfy his wealthy clients, he is best known for his portfolio of designs that were shown on live models at the House of Worth. Clients selected a model, chose colors and fabrics and had a duplicate garment tailor-made in Worth’s workshop. The first appearance of true Haute Couture by Worth was unveiled, like many other famous Parisian landmarks, at the World’s Fair of 1900.

Many fashion houses closely followed in Worth’s footsteps, some of them you may have heard of such as Chanel and Dior. In the 1960s another large crop of Haute Couture brands were born when students of the first generation began leaving and creating their own design houses, including Yves Saint Laurent and Pierre Cardin. The general outlines for Haute Couture include having one’s own workshop with employees that create made-to-order styles for clients after consultations and fittings. They also must participate in the fashion week events showing their designs off to members of the press.

At the height of importance, over 100 Parisian Haute Couture houses were responsible for giving the city its claim to fashion fame during the 1940s. However, today’s numbers are drastically lower at somewhere between 10-20.

Perhaps the decline of Haute Couture has affected the overall sense of fashion in modern-day ready-to-wear Paris. After my first 3-day winter journey through Paris and prior to this longer adventure in the city, I had an idealistic view of fashion in Paris. I, like most people, felt that everyone in Paris was incredibly fashionable. I was misinformed. While there are certainly many incredibly well-dressed men and women wandering the streets at all times, there are also MANY MORE weirdly dressed, awkwardly assembled people.

Let’s discuss the positive examples first. The men in suits are simply stunning. A business suit in Paris is well-tailored, expensive and looks spectacular on a handsome man. They are just on another level from suits in mid-west America. And there are definitely ladies around here rocking awesome heels on cobblestone streets. Perhaps if I hung out around the expensive shopping districts or business neighborhoods more often, I would have more opportunities to revel in these sights. However, my typical haunts are usually parks, the metro and tourist spots so I get to see the fashion of all the other Parisians, and to be fair, lots of other nationalities that can sometimes equally be determined by their style of dress.

I’ve been trying to collect pictures of interesting fashion over the past two months because as we all know, a picture is worth a thousand words. However, it is sometimes difficult to be stealthy in snapping pictures of unknowing people. And it is also rude, so shame on me. Here are a few of the “rules” I have noticed:

1. Mix and match all sorts of patterns and colors that have no common theme.

2. Men wear purses. All the time. Everywhere. Sometimes they match their shoes (see below right)

3. Wearing “swishy” workout pants from circa 1995. I’m not sure if this style is out of date or coming back around so perhaps I shouldn’t make fun yet.

4. Black, and it’s various shades, are the only colors in the color wheel. A joke we heard and love is “I was in a great mood this morning so I decided to wear gray.”

5. There is no such thing as “too small” “not enough coverage” or “too see-through.” No surprise here, we are in France after all.

6. The Canadian tuxedo is alive and well all the way across the pond. 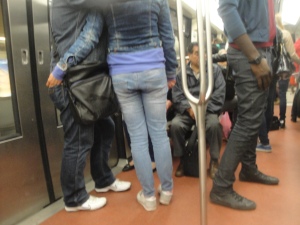 7. When the weather finally gets nice, the men in jorts come out. 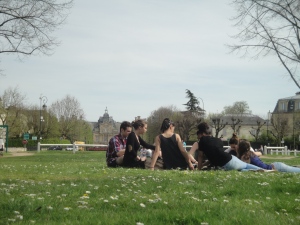 9. It is never too cold to wear shorts, just wear pants or tights underneath them.

And #10. My favorite because it applies to me and allows me to be super lazy…women do not worry about their hair or makeup. Au natural is in. I refuse to leave the house with my hair sticking out in 20 different directions, but it would be perfectly acceptable here.

Pretty sure this lady wasn’t Parisian, but she was outfitted in a full Russian style fur ensemble that warranted a picture anyway.