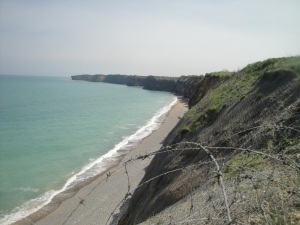 The weekend trip that I have been looking forward to the most since I arrived in France is Normandy. Located along the northern coast of France, this area is a wealth of history. Known most famously to Americans as the location of the D-Day landings, it has a rich history that goes back long before 1944. The area has been inhabited since prehistoric times. Vikings raided the area in the 9th century. William the Conquerer was once the Duke of Normandy before heading to England. But American tourists usually do not bother with any of that history, we are much more interested in what happened on June 6, 1944.

When I told some of my American friends in Paris that I wanted to do a weekend in Normandy, a group of like-minded travelers started to form immediately. Six of us total headed to Bayeux on Saturday morning. This small town is a perfect base location for all your Normandy travels. It is located only 7 kilometers from the English Channel and therefore incredibly close to all the landing beaches. And yet, it is remarkably in tact as it was not touched during the war. Everything is within walking distance and a variety of tours heading towards the landing beaches and other Normandy attractions depart from Bayeux daily.

Some of my friends opted for an independent bike ride through the countryside and famous landing beaches of Normandy. I decided on a guided tour to appease my nerdy history-loving side. My French (and yet incredibly fantastic English speaker) guide Jonathan, was a wealth of knowledge on everything World War II. Originally from Caen, located only 30 km from Bayeux, he grew up with first-hand knowledge of the D-Day landings all around him. His paternal grandfather was taken prisoner by the Nazis and transported to Germany where he was forced to work in a factory. Being a Catholic, he was kept relatively safe in his enslavement, but some of the others were discovered to be Jews and murdered. The grandfather survived the war and in turn instilled a love of history and WWII to his grandson. When he passed last year at the age of 92, he gave Jonathan his German identification card to show on his tours. 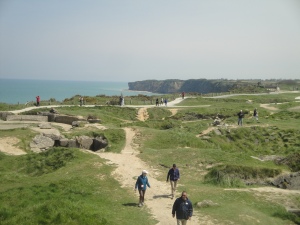 We first headed to Pointe du Hoc, part of the Atlantic Wall, where Germans located a series of underground living quarters, pillbox structures and heavy artillery. The sight has been left in excellent shape with many original fortifications still in place. There are a series of bomb craters all around the area making for an interesting spectacle. Views over the English Channel are spectacular here, with a sharp cliffy drop off into the sea. A monument has been erected by the French to honor the U.S. Army Rangers that scaled this 100 foot cliff to seize the German artillery that could have fired upon the troops landing on Omaha and Utah beaches.

Our next stop was Omaha Beach, the mecca of American D-Day landing beaches. Chosen for its strategic location as a 5-mile long strip of sand between rocky cliffs, Omaha was necessary to link the British landings to the east at Gold Beach and the American landings to the west at Utah Beach, creating a continuous lodgement along the Normandy coast. The 29th and 1st Infantry Divisions along with nine companies of U.S. Army Rangers were responsible for securing this location. The sight of Omaha Beach is overlooked by cliffs on either side, making attacking the area very difficult. Despite the 2,400 American casualties at Omaha Beach on June 6, 1944, by the end of the day more than 34,000 troops had landed on this bloodied beach and secured a significant stronghold over the area.

Located on a 172 acre bluff overlooking Omaha Beach lies the final resting place of 9,387 American soldiers, most of which lost their lives during the D-Day landings and ensuing military operations of WWII. Thousands of marble crosses and Star of David’s create a remarkable sight upon this hallowed ground. It would be impossible to personally view each stone, but I forced myself to walk all the way through to the back in hopes of taking in the enormous size of the American sacrifice in Normandy. 1,557 names are etched into the Walls of the Missing, a semi-circular area attached to the memorial that lists those missing in action. Occasionally remains are still found and gold rosettes are placed next to the name on the wall when this occurs. Visiting family members of those soldiers with headstones or on the Wall are encouraged to take wet sand from Omaha Beach and rub it into the engraved letters creating a strong contrast against the white Italian marble.

I was so glad that our tour visited the American Cemetery and Memorial at the close of the day. At 5:20 every evening they hold a ceremony for the lowering of the two American flags while Taps is played. It was an incredibly moving experience for me. Americans are encouraged to place their hands over their hearts while any visiting veterans or active service members are instructed to salute. Visiting veterans can also request the honor of receiving the flag once it has been lowered and folded. This ceremony was the most powerful emotional experience that I have had in France thus far. An incredible wave of patriotism rushed over me as I stood shoulder to shoulder with fellow Americans on foreign soil bloodied with the sacrifice of so many. Making it extra special was the fact that I visited this iconic place on Armed Forces Day.