After almost three full weeks in Paris, I thought it was time to do some faire du lèche-vitrines, window-shopping or more literally window-licking in French. Of course Paris has the Champs-Élysées with its expensive designer boutiques and plethora of tourist haunts as well. However, I’ve been there before and I had a new destination in mind. Today I ventured to the Galeries Lafayette, a true grand magasin (department store) if ever there was one!

The first Galeries Lafayette was opened in 1895 in a very small shop on the corner of rue La Fayette and Chaussée d’Antin by cousins Théophile Bader and Alphonse Kahn. One year later, they were already expanding. By 1905 the store had grown so large that they acquired property on boulevard Haussmann and planned for new construction. Architects Georges Chedanne and Ferdinand Chanut were commissioned to design the new 10-story department store featuring an exquisite Art Nouveau glass and steel dome. The extravagance of design was an effort to outdo nearby archrival, Printemps, where a glass and iron atrium rises 6 stories. Construction on the new Galeries Lafayette was completed in 1912.

Upon first entering Galeries Lafayette, all my senses were immediately on high alert. The bright lights of each designer boutique, the scent of expensive French perfume, the sound of millionaires sliding their credit cards, the feel of exquisite leather on thousand-euro bags. OK maybe my taste buds weren’t immediately alerted, except for the fact that I now had a craving for a très cher designer handbag.

The ground level of Galeries Lafayette showcases cosmetics, perfume, fine jewelry and watches, and the crème de la crème of designer handbags. Gucci, Prada, Louis Vuitton, Hermes, Chanel, Dior, Rolex, Tiffany, Omega, etc. etc…the list goes on forever and forever of designer brands that I could never afford even in my dreams. High-priced items and doors to the outside create an equation that results in possibly more security guards than shoppers. I did not mind this fact though, as I was not planning to steal anything and I always appreciate a good-looking man in a black suit. 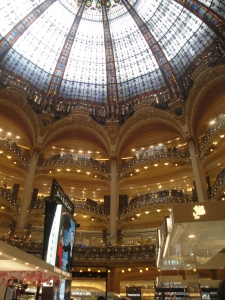 I  walked around the jewelry and bags for a while before heading down to the basement level where they have women’s shoes. This was an area that I actually had some business being, since there were items in my price range. After an awful experience with my shoes this past weekend, I have been relegated to my Nike’s for comfort purposes all week. I am in desperate need of some attractive, comfortable shoes but still couldn’t pull the trigger on the overpriced options at Galeries Lafayette. I also considered a new umbrella since the ultra-cheap one I brought from home is already broken. But again, I could not pull the trigger on a 30 euro option when I can probably get one for 10 euros somewhere else.

From the center cosmetics section of Galeries Lafayette, shoppers get a magnificent view of the Art Nouveau ceiling masterpiece 33 meters above. Here’s where I admit that I was more impressed and interested in the architecture of the building than the wares held within. I guess I just don’t appreciate high fashion as much as I should. The 10-sectioned stained-glass dome features bold colors of blue, red and orange. Three tiers of arched wrought-iron balconies open to the expanse below. When Galeries Lafayette was constructed, its main business dealt in French textiles. There are 10 coats of arms around the base of the dome that represent the 10 French cities that were most important in the textile industry.

The next four floors deal in women’s fashion. Two floors of traditional clothing, one devoted to lingerie and hosiery, and one for jeans, coats, and swimwear. I walked around each of these, not the least bit excited about the “interesting” European styles that permeate Paris. The next floor happened to be my favorite though. It housed children’s clothing and toys. Out of all the incredible items at Galeries Lafayette, I might have been most interested in the Lego Architecture section. They had a model London Tower Bridge (we know I love models!) and an entire Frank Lloyd Wright Lego section! Heaven for sure. There was also a nerf section where you can try shooting all the nerf guns (pretty freakin’ cool)! 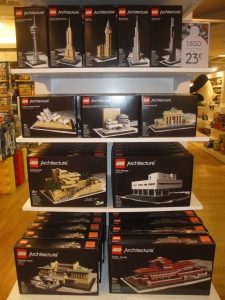 There is one more floor that houses a bookstore and souvenirs but you can continue on the escalator past this level all the way to the roof for a splendid view over Paris. I’m all about finding cheap ways to do things and Galeries Lafayette offers the perfect opportunity to see the city from above at a much better price than any other monument…free!

I may not have bought anything on my shopping excursion today but I certainly learned of another place in Paris that will remind me of my poor, unfashionable status should I ever forget.