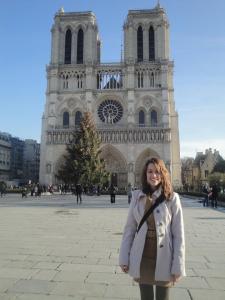 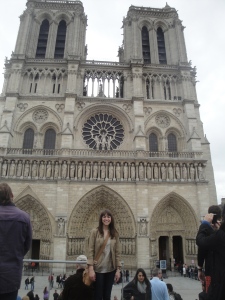 “The greatest products of architecture are less the works of individuals than of society; rather the offspring of a nation’s effort, than the inspired flash of a man of genius…”      ― Victor Hugo, The Hunchback of Notre-Dame

Confession: I have never read The Hunchback of Notre-Dame. Nor have I watched the Disney version. So really, I have no idea what the story is about. I have, however, been to Notre-Dame and I can attest that it is everything and more than it is cracked up to be. With many centuries of construction, desecration, and renovation, it has certainly been a work of the French society as a whole. Celebrating the 850th anniversary in 2013, this beloved Paris landmark is quite possibly my favorite spot in Paris. I may be more than a little obsessed with architecture, particularly churches and cathedrals; and the Gothic style has always appealed to me more than others. So it comes with no surprise that I am in love with Notre-Dame. I am, however, not in love with our American pronunciation Noter Daaaame…ugh. Although, when I tried to tell my host mom where I went today, she had no idea what I was trying to say in my awful French accent. Apparently my lack of a throaty “Notre” made understanding my French impossible anyway, turns out I should have stuck with Noter Daaaame instead!

I first visited Notre-Dame in December 2011 and spent the better part of an afternoon and several hundred pictures on the inside. I love how the city of Paris has kept this historic landmark free of charge. I’m sure they could charge a few euros and make a lot of money, but I have always been of the feeling that churches should be free to visit (can we get the rest of Europe on board here?!) From my first visit, I knew that it was a special place. There is something awe-inspiring about sitting in a cathedral that has survived the test of time for 850 years. I would be amazed by the engineering feats if the cathedral was built 50 years ago and to think of the time and effort that went into the construction without the aid of modern construction equipment! 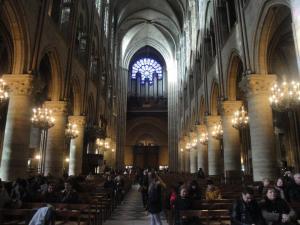 The first stone was laid in 1163 by an anonymous builder in the presence of Pope Alexander III. Work was slow and continued for the next century, under the tutelage of four different esteemed builders. You can view a detailed timeline here. One famous design feature of Notre-Dame is its flying buttresses. Original plans did not include these additional support systems, but after stress fractures began occuring around the choir and nave, builders searched for a solution. A new engineering device of the time, flying buttresses add a definitive look to the exterior of the cathedral. The advantage of such systems is that the outer walls no longer need to be heavy and massive enough to resist the lateral thrusts of the vault. Instead the wall surface could be reduced (allowing larger windows filled with stained glass), with the vertical mass concentrated into external buttresses. Though most of the cathedral is filled with stained glass, Notre-Dame’s rose windows are world-renowned. Much of the existing designs are original glass. Read more about rose windows here. 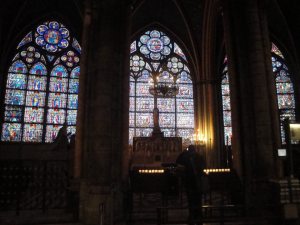 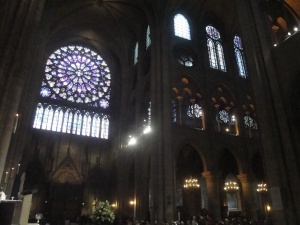 Notre-Dame suffered great damage in 1793 during the French Revolution. Though the building itself remained much in tact, many religious treasures were either destroyed or plundered.  Luckily, the great bells avoided being melted down for war supplies. During this time, the cathedral was used as a storehouse for food. In 1845 a restoration program was initiated by architects Jean-Baptiste-Antoine Lassus and Eugène Viollet-le-Duc. World War II also caused severe damage to Notre-Dame, mainly it’s numerous stained-glass windows. Upon visiting the cathedral, one can notice windows sporting a geometric pattern instead of the traditional Biblical scenes, where they have been replaced. To celebrate the 850th anniversary, plans are underway for the renovation of many items at Notre-Dame, including eight new bells, upgrades to the interior lighting, and the restoration of the Great Organ. Read more about the Cathedral here. 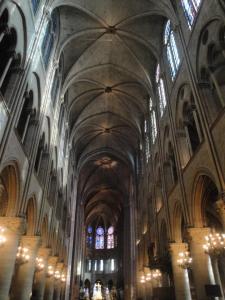 “I wanted to see you again, touch you, know who you were, see if I would find you identical with the ideal image of you which had remained with me and perhaps shatter my dream with the aid of reality.”     ― Victor Hugo, The Hunchback Of Notre Dame

Visiting Notre-Dame a second time was just as impressive, architecturally, but was more frustrating from a visitor standpoint. In December, there was virtually no line to get in. The cathedral was all but empty and taking pictures and walking around were incredibly easy. April is a different story. There was a lengthy line to get in, even though it moves very quickly as no money is required. The interior was very crowded and interrupted easy viewing throughout. We arrived at the cathedral just before noon mass, and were serenaded by the fantastic bell tower. We didn’t attend mass, but I can only imagine how awful it would be to have thousands of noisy visitors snapping photos while you are trying to worship. A large complex has been constructed in front of the cathedral to provide seating for various anniversary celebrations. I found this to be detracting from the exterior grandeur. I have always found the back exterior to be much greater in appeal than the façade anyway. Something about the flying buttresses and it’s location on the Seine create a picture-perfect postcard shot every single time.

I plan to visit Notre-Dame many times during my stay in Paris, perhaps attending a mass or climbing the 387 stairs up the bell tower at some point. As far as Gothic cathedrals are concerned, it is certainly one of the best. I will most likely visit many more during my stay in France, so I will keep you updated on how Notre-Dame de Paris stacks up with the competition!